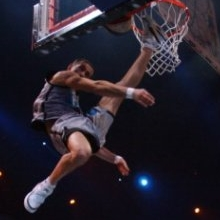 We are starting this blog with the purpose of bringing together all those passionate about the sport/art of dunking with emphasis on what it takes to become and be a dunker these days. Throughout this series we’ll share insights and experiences, that will no doubt prove useful to many of you dunkaholics.

With the ever growing popularity of dunking and growing interest in it, it’s important to address dunking as an art and as a sport.

Many people find dunking as a way to express themselves. Much in the same way a painter expresses him/herself through painting pictures, musician through playing instruments or a sculpturer through sculpting. A dunker expresses himself through movement and making dunks.

When addressing dunking as a sport we must look at it in the same way we do with any physical activity. It is a physical act and we are to treat dunkers as athletes. Jumping itself is one of the elemental athletic abilities and it is the basis for being able to dunk – no way around it. Just like sprinters don’t just go and sprint a few times per week and forget about everything else, limiting their true potential and progress, we also must not ignore the importance of the holistic approach to preparation for our activity. We must understand the physical demands behind dunking and act to improve our dunking ability accordingly.

A growing number of dunkers are becoming aware of the benefits of applying proper training strategies. Helping them reach levels that were, and still are, thought to be reserved only for the few ‘naturally gifted’ ones – born with the ability to jump high. Most of us unfortunately still lack this understanding and simply jump from one method to another in search of a magical exercise or program that will make us become better dunkers.

Let me take a step back to introduce myself first. My name is Jost and I’ve played many sports in my life before finding the ultimate thrill in dunking. I’ve always been fascinated by dunking, at first just watching other people. I instantly knew this is something I wanted to be able to do myself. Throwing down my first dunk on a legit rim to this day remains in me as my strongest sense of accomplishment. I fell in love with dunking. Since then I’ve always searched for a way to get better at it which meant not only practicing dunks, but trying to jump higher.

I’m not tall, 183cm/6’0”, and I’ve never been the most gifted jumper or athlete for that matter. I always knew a guy my age who would make all my efforts look simply laughable. I’ve been told I’m not capable of doing it, I’ve been mocked and discouraged countless times.

But I’ve always had a strong drive to prove to myself  that I can do it. Even if I’m not the most gifted I always felt that I am going to find a way to get better.

I went through just about every popular »10 weeks, 10” gain on vertical« type of program you can find – through countless gimmicks, trial and errors.

As I’ve been going through my journey, I’ve been progressively learning about jumping and the human body. Through education and experience, delving deep into understanding the human body, I came to certain realisations about improving jumping and all-around athletic abilities. With understanding the key principles I’ve made huge gains applying them through properly structured training and the right mental attitude.

I’ll be running this blog in efforts to help you direct in the right way and avoid all the unnecessary struggles I went through myself. The cherry on top of the cake will be launch of our very own PrimeStar Sports/Dunk Elite Online Academy giving you insight and support never seen in our game before.

I’ll also be posting all sorts of other dunk related information, links and resources. From keeping up to date on what’s going on in the dunk scene at the moment, to random quick tips on how to upgrade your jumping/dunking game.

Dunking has been around since the beginning of the game of basketball. With one-of-a-kind players like Dr. J (Julius Erving) spicing it up with (at the time) unseen and spectacular feats, dunking gained on popularity very quickly amongst basketball fans. With the influence of legends like his Airness (also known as Michael Jordan) participating in the NBA dunk contest dunking started becoming considered an art, more than just a spectacular act in a basketball game.

But the real hype surrounding dunking started with Vince Carter joining the league in the era popularly known as ”Vinsanity”. Carter’s (in-game) dunks were so outrageous and unbelievable it made people wonder if they were dreaming. The peak of Vinsanity occurred at the now infamous NBA Dunk Contest in 2000, with Vince Carter putting on a ridiculous display of dunks that left both the fans and the NBA players in shock. It was the moment of THE FIRST DUNKING REVOLUTION.

Vince Carter undoubtedly had the biggest global impact on dunking and also became one of the most idolized basketball players and inspired countless to dunk. Carter is to this day considered by many the greatest player/dunker of all times.

Before the hype surrounding dunking in the NBA there was a group of dunkers based in France called Slam Nation who performed individual dunks in front of crowds. They were the first and original professional dunkers who started travelling around the globe displaying their talents on tours around Europe and later invited overseas to perform during half time of NBA games.

Slam Nation laid the foundation to turn dunking into a profession. Some of the originators of Slam Nation are the most recognised and most influential dunkers and living legends, particularly Kadour Ziani a.k.a. The Dunkfather, who’s philosophy goes far beyond dunking.

In the summer of 2006, at the AND1 Mixtape tour stop in Houston TX, Taurian Fontenette (also known as The Air Up There) executed a dunk that left basketball fans around the globe in awe. The dunk is now infamously known as the 720. As the name suggest – two 360s in the air. The second revolution no one even dared imagine possible. It was, and is even now, one of the most difficult dunks to execute which permanently changed the dunk game and people’s perception of what is possible.

The new era begun in the late 2007/early 2008 with Team Flight Brothers & Flying 101 dropping dunk videos on YouTube on a regular basis. With the original dunk sensation T-Dub on the scene minds were being blown on a daily basis. Just a bit later with the introduction of prodigies like Guy Dupuy, Werm, Jus Fly, Young Hollywood, Golden Child etc the dunk game quickly took off to another galaxy.

DUNKING AT THE PRESENT

While even a few years back we thought dunking was reserved for the young and only those few extremely talented the perception has quickly changed in the last few years.

Guys like Lipek (Rafal Lipinski) and Jordan Kliganon are improving at a scary rate that leaves even experts on physical performance in disbelief, proving that anyone is capable of flying and always improving if one has the will. Smoove, Dmitry Krivenko, is making everyone wonder if there’s an end to creativity and if there is such thing as a dunk too difficult to be completed. Ever emerging new names on the dunk scene like Chris Staples and Jonathan Clark, bringing their own unseen flair to the game.

Then there’s guys like Porter Maberry, standing 5’5”(165cm) tall, who shouldn’t have been even having thoughts of touching the backboard, let alone dunking.

With the influence of the likes of Reemix (Myree Bowden, 32), Air Up There (Taurian Fontenette, 32) and Iron Mario (Mariusz Szwed, 38) we now understand that we can challenge not only gravity but also age.

Whether we are aware or not, it’s people like those guys that keep expanding our minds and perception of what is possible. It’s them who, consciously or subliminally, encourage us and make us believe in ourselves.

Keep flying high! Until next time